Jennifer Lopez has opened up about her romance with fiance Ben Affleck and their plans to ‘build a family’ together in an emotional interview that saw her gushing about the couple’s ‘deep love’.

The 52-year-old singer couldn’t take the smile off her face as she spoke about her relationship with the actor during an interview with Good Morning America on Thursday, six weeks after confirming that they are engaged for a second time.

J.Lo, who first started dating Affleck, 49, in 2002, admitted that she has been having ‘the best time of her life’ since reuniting with the on-screen star in May 2021 – 17 years after they broke up and ended their first engagement.

‘This is the best time of my life,’ the popstar said when asked about her fiance. ‘I love my career but nothing is more fulfilling to me than being able to build a family with someone I love deeply and who is just as dedicated to family and to each other as we can be.’ 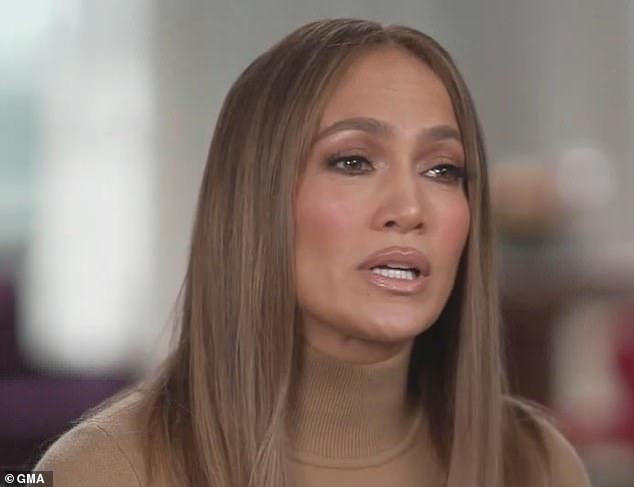 Jennifer Lopez made an emotional appearance on Good Morning America on Thursday, when she launched a new $14 billion business loan initiative for Latina women 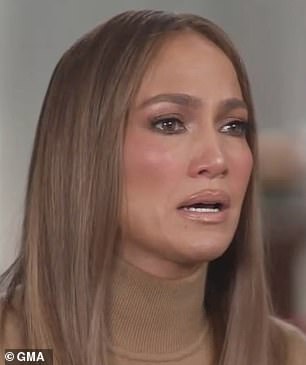 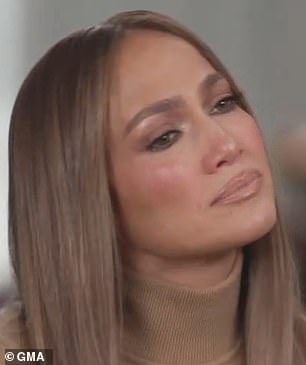 The 52-year-old broke down in tears while discussing the ‘importance’ of the program, which will give $14 billion in loans to 600,000 low-income Latina entrepreneurs by 2030 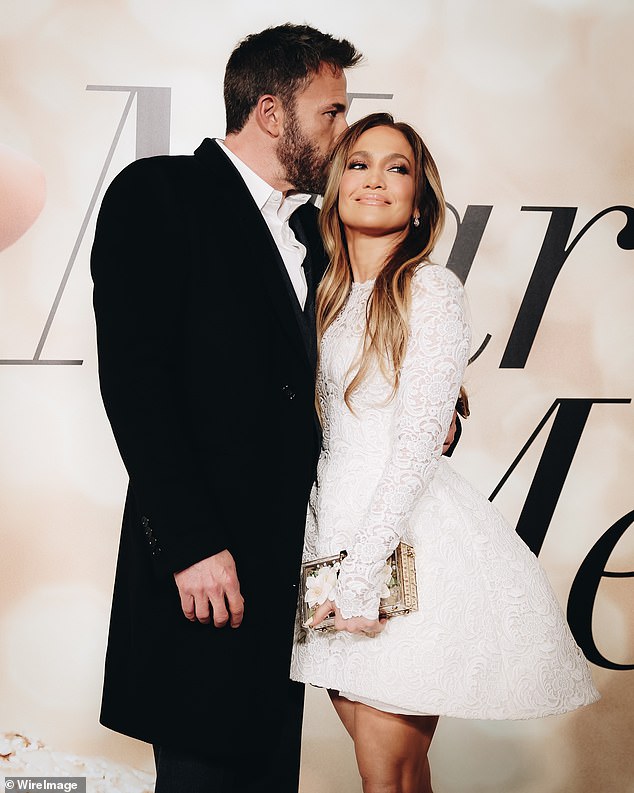 During the show, Lopez also opened up about her romance with fiance Ben Affleck, gushing about their ‘deep love’ and their ‘dedication’ to ‘building a family’ together. 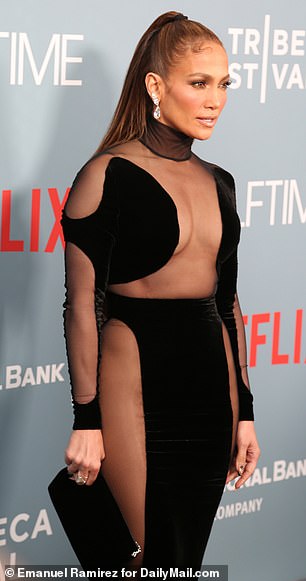 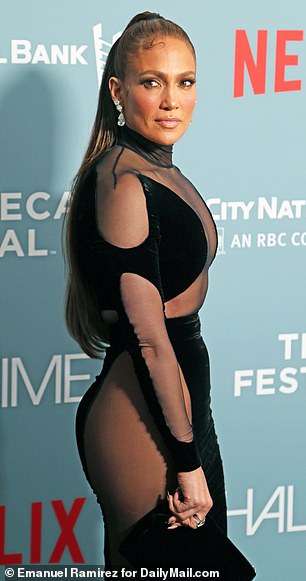 Her appearance on GMA came hours after she attended the New York City premiere of her new Netflix documentary, Halftime

Lopez – who has two children with her ex-husband Marc Anthony and will become stepmother to the three children that Affleck shares with ex-wife Jennifer Garner – added that she ‘loves the idea of ​​the future and what [she and Affleck] can create’, but noted that she ‘really wants to save the moment and stay real present in it as much as she can’.

But while the singer seemed more than happy to share some insight into her romance with Affleck, she also got emotional during her interview while announcing a new $14 billion business loan initiative aimed at Latina entrepreneurs.

The popstar is spearheading the new program, which was created in partnership with Goldman Sachs and non-profit organization Grameen America, and which will offer financial assistance to low-income Latina women who are attempting to launch new businesses.

Lopez, who was born and raised in the Bronx by Puerto Rican, teared up as she discussed the ‘importance’ of the initiative and the ‘positive’ impact that she hopes it will have on those who have faced so many ‘injustices’.

‘It’s important to me,’ she said of the loan program, while breaking down in tears. ‘When you get a little bit older, you understand the meaning behind and you’ve seen enough… you’ve had your own struggle, you’ve seen enough injustices.

‘I just feel like this country needs more love and positivity and people who want to do good things and are not fighting against each other and are just giving each other a hand up. That’s important to me.’

She added: ‘Honestly I’m hoping to kind of change the fabric of America, especially for Latina women.’

When asked why she feels Latina women are ‘important’ to the country, J.Lo said: ‘They’re just tough. They’re made from a certain kind of fabric. They are entrepreneurial, they are inventive, they are creative.’ 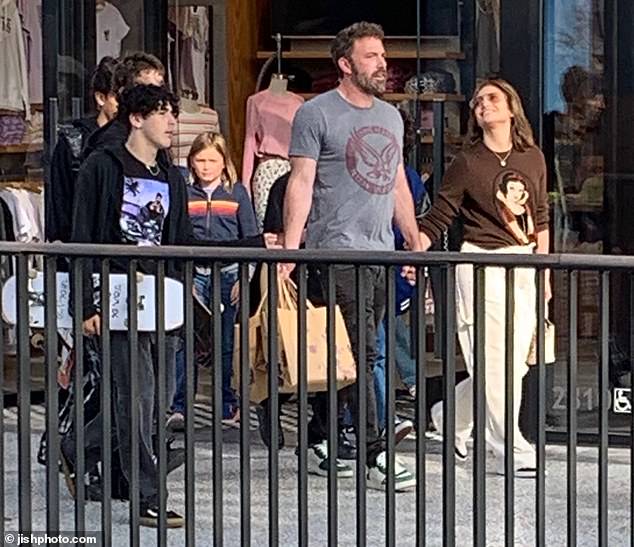 Lopez shares two children with her ex-husband Marc Anthony, while Affleck, 49, has three kids with his ex-wife Jennifer Garner. Lopez and Affleck are seen with their brood of five this week

When asked about her relationship with Affleck, the chart-topper, pictured ahead of her GMA interview, said that she is having ‘the best time of her life’

In an additional statement shared via her spokesperson, J.Lo added: ‘Being Latino in this country has always been a matter of pride for me.

‘I am humbled and beyond grateful to partner with Grameen America. We’re building pathways to employment and leadership opportunities. There’s so much strength in this community and we’re harnessing that.

‘This partnership will create equality, inclusivity and opportunity for Latina women in business. This will change the fabric of America!’

While attending the red carpet premiere for the new movie, which was filmed in 2020 as Lopez prepared to perform at the Super Bowl, the singer once again opened up about her hopes for the future, telling Entertainment Tonight that she ‘feels like there is a lot left for her’ to achieve and enjoy in the years ahead.

‘It’s halftime! I keep saying that,’ she told the outlet. ‘It’s so funny, we were talking about this today: Champions are made in the 3rd and 4th quarter. That’s when you win!

‘I feel like there’s a lot left for me. So, I’m very excited about it… I do think it’s just halftime.’

Although Lopez remained mum about any plans for her wedding to Affleck, a source told ET that the couple ‘want to get married soon’ and are ‘talking about having a destination or tropical wedding’.

‘They can’t wait to spend the rest of their lives together forever, happily in love,’ the insider added. 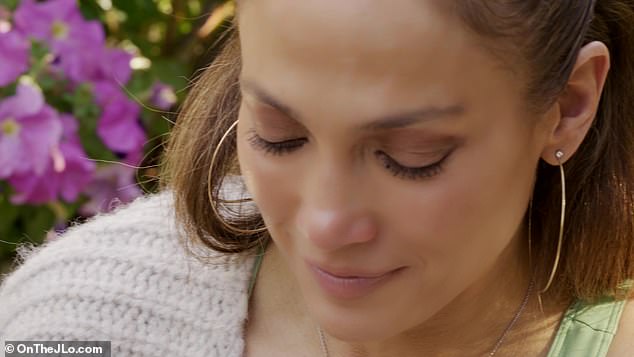 Lopez announced the news of her second engagement to Affleck in April, sharing a video of herself crying while looking down at her stunning ring 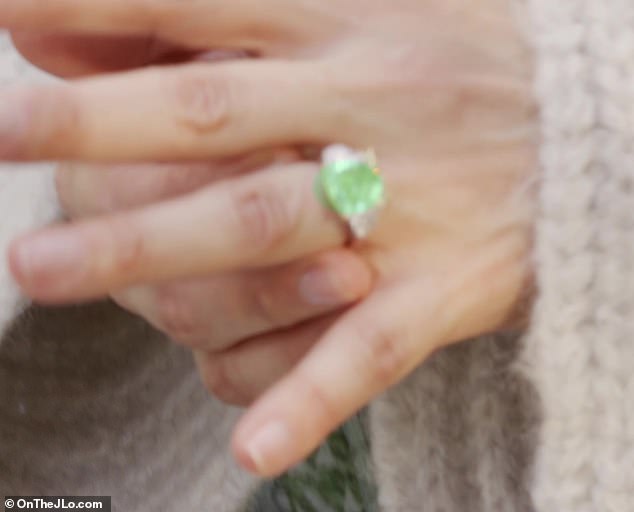 Affleck, who first proposed to Lopez in 2003, popped the question for a second time with a huge green diamond

Lopez and Affleck confirmed their engagement news to the world in April of this year, after the singer sparked furious speculation that the actor had popped the question when she was seen sporting a large green ring on her ring finger.

The popstar announced the joyful news on her website, where she posted a short video of herself crying and looking down at her dazzling ring, which features a large green diamond flanked by four smaller white diamonds.

Days later, she revealed that Affleck popped the question while she was romantic naked in the bathtub, describing the moment as ‘the most thing she could have imagined’.

‘Did you ever imagine your biggest dream could come true?’ she wrote in her newsletter. ‘Saturday night while at my favorite place on earth (in the bubble bath), my beautiful love got on one knee and proposed.

‘I was taken totally off guard and just looked at his eyes smiling and crying at the same time trying hard to get my head around the fact that after 20 years this was happening all over again, I was quite literally speechless and he said,’ is that a yes?’ I said YES of course that’s a YES.’

‘I was smiling so big and tears were coming down my face, feeling so incredibly happy and whole.

‘It was nothing fancy at all, but it was the most romantic thing I could’ve ever imagined…just a quiet Saturday night at home, two people promising to always be there for each other. Two very lucky people. Who got a second chance at true love.

‘Green has always been my lucky color and now, for sure, it always will be.’